Data-Driven DevSecOps uses system-level visibility and real-time attack data to make the cybersecurity function in a mobile DevOps CI/CD pipeline more agile and efficient. Traditionally, there was only one way to achieve DevSecOps in a mobile CI/CD pipeline. Now, with the release of ThreatScope™ mobile threat intelligence center, that’s changed. Join us on the journey towards a better mobile DevSecOps future.

The Challenge of mobile DevSecOps Today

The challenge of traditional DevSecOps inside the rapid and agile DevOps CI/CD pipeline looks a lot like that of an old-world “bucket brigade.”
In a bucket brigade, firefighters line up and pass buckets of water to each other to try and contain or extinguish a fire. In this noble battle, the brigade works extremely hard. The intention of every brigade member is heroic. Every bucket starts off full. But, at the end of the line, that same bucket is only half full or empty. Most of the effect of the effort is leaked, dropped, spilled, and splashed on the ground.
Similarly, think of cyberattacks and cyberthreats happening against real mobile customers and the mobile business as a fire. This fire is constant, growing, shifting, and adapting hour-by-hour. It’s not contained, as in a fireplace or stove. Cyberthreats leap, attack, and spark new fires everywhere. To combat this threat, cybersecurity teams use a “bucket,” i.e., the traditional DevSecOps tools like penetration testing and code scanning. Into the bucket, Mobile-Dev and Cybersecurity teams pour the water, the artifacts of the build process, or the builds and binaries of Android & iOS apps. These Android & iOS builds are protected by whatever could be added in time for the submission to the pen tester. As these buckets traverse the brigade, from Mobile Dev to cybersecurity, to Pen Tester, back to cybersecurity, and finally back to Mobile Dev, what returns is a value (+/-) for an artifact that no longer matters. Neither the DevOps CI/CD process nor the fire waited. The app was most likely released. The cyberattacks moved. All while the bucket brigade stayed in place. A bucket brigade can only do so much.

Data-Driven DevSecOps delivers a more agile and efficient operating model for the cybersecurity function in a mobile DevOps CI/CD pipeline. Data-Driven DevSecOps combines two key elements: (1) a system of record to automatically build and deliver mobile app security, anti-fraud, anti-malware, and anti-cheat protections into Android & iOS apps, and (2) inside that system of record, real-time cyberattack and cyber threat data from Android & iOS apps in the production mobile environment. In the Data-Driven model of mobile DevSecOps, the cybersecurity team stays lock step with cyberattacks and cyber threats, uses a system to manage and control the delivery of protections into Android and iOS apps, and gets instant feedback on the value of each protection in the production environment. 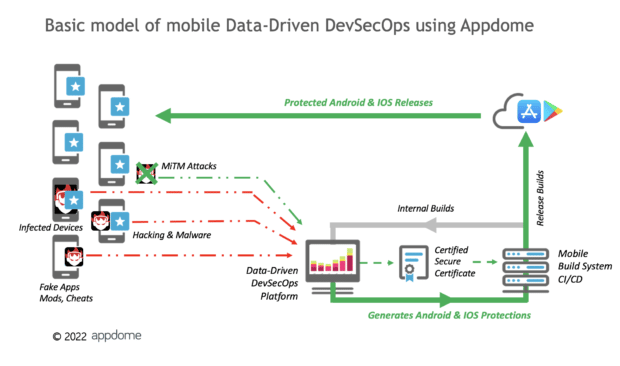 In this model, real-time data drives the protections released into Android & iOS apps. With real-time data and a system to build protections into Android & iOS apps inside the CI/CD, the old problem of the mobile dev team releasing the app before the pen test is complete or removing protections submitted to the pen tester to release the app is gone. On top of that, all penetration testers operate under a pre-defined scope, or SOW, and may not even test what’s actually occurring in the production environment. With real-time data driving the protection decisions, mobile brands, developers and cyber teams guarantee the relevance of every protection to the mobile business. Finally, in Data-Driven DevSecOps, teams get instant feedback by build and by release on the protections added and the impact of protections against real-world, live attacks and threats in the production environment.

Data and Visibility in Data-Driven DevSecOps