One of the biggest themes this year, for mobile developers and mobile security teams alike, is known as the “Shift-Left” security model. Crunchbase covers the shift left security model as one of the next big trends in 2022. According to Crunchbase, mobile app development will “move towards a world that would allow developers and IT departments to formally verify that software is in compliance with a [security] specification before the software goes into production.”

How Do You Apply Shift-Left Security in Mobile Development? In a standard development process, including DevOps or DevSecOps, there is tension between the objectives of the developers and the objectives of the security teams. Developers are constantly working to improve the top KPIs for all mobile apps. The number of downloads, active users, screens per visit, ARPU, COCA, crash rates, and more are critical to the success of a mobile app. Security teams are constantly working to improve the security of the mobile app. For security teams, the type and class of exploits, the protections needed to satisfy regulatory compliance, and the protections expected by the mobile app’s end users, matter most. While code scanning improved visibility, the work of securing the app, users, and data remained. The hard work of building protections was still left to the mobile development team.

But “what if,” mobile developers and security teams can each get what they want and need?  What if, instead of relying on code scans to identify vulnerabilities, code scans (instead) validate the security already present and built into the mobile app?  What if, instead of “red light” alarm bells going off in the release process, “green lights” show up and releases are cleared easily?

That’s the point of shift-left security for mobile app development. How is Shift-Left and DevSecOps Different?

This “Shift-Left” in security is very different from DevSecOps models used by mobile app developers today. In the DevSecOps model, mobile developers first build the mobile app. Then, they send a ‘release candidate’ to a third-party pen tester or automated scanning tool to find vulnerabilities. When vulnerabilities are found, the development and security teams scramble to remedy the security deficiencies before the app is released. If anything in this process is manual – including SDKs and coding – the release is stalled or security is compromised to achieve the release deadline.

The classic DevSecOps model brought visibility through code scanning and pen testing inside the mobile development process. But, as the developer, if you didn’t have the tools, skills, people or time to fix the issues uncovered by the pen tester or app scan, you were stuck.  In Shift Left Security Models, developers actually build specified security features into mobile apps using their existing systems, workflows, automation suites and platforms used to release apps today. Security teams specify the needed protections, much like product managers, delivering feature requirements to the mobile engineering team that are required for the app. Engineering teams take these requirements and include them in the same DevOps development processes used to create the app.

How Does Appdome Deliver Shift-Left Security for Mobile Apps? 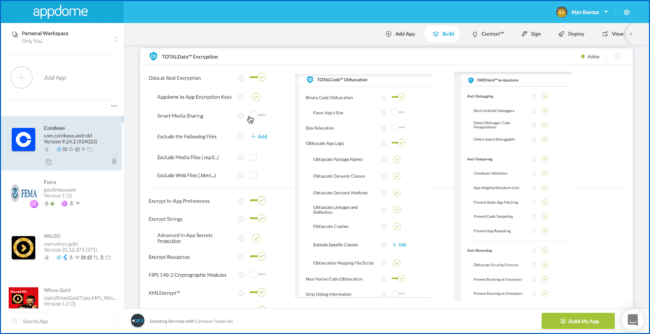 As Appdome's Chief Customer Officer, Chris is responsible for the full customer life cycle. Before stepping up to the CCO role, he ran sales and marketing. Before starting the sales organization at Appdome, Chris was CMO at Pulse Secure.