In order to function, every mobile app needs to store many different kinds of data in memory (RAM) while the application is being used. This can include user data, strings including credentials, passwords, or keys, and other application-specific data, such as mobile game values, scores, in-app purchase data and more. Cybercriminals often target a running application’s memory and attempt to harvest, access or modify data while it is transiently stored in memory, for example by dumping the application memory while the data is in use. The sensitive memory might be saved to disk, stored in a core dump, or remain uncleared if the application crashes, or if the programmer does not properly clear the memory before freeing it.

What is Android Memory Encryption?

Using Appdome Android Memory Encryption, Android mobile app and game developers can protect the data stored in RAM by encrypting the data while the app is being used. Android Memory Encryption encrypts app-specific data stored in the application’s memory during runtime. This prevents malicious actors from accessing or attempting to modify the application’s memory in order to cheat in games, steal user information, or modify mobile app functionality, logic or behavior while the app is being used.

Appdome is a no-code mobile app security platform designed to add security features, like Android Memory Encryption to any Android app without coding. This KB shows mobile developers, DevSec and security professionals how to use Appdome’s simple ‘click to build’ user interface to quickly and easily encrypt app-specific data in Android apps. 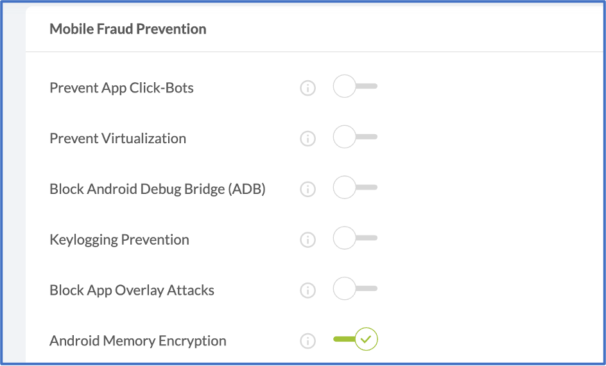 Using Appdome, there are no development or coding prerequisites to build secured apps Appdome and prevent fraud in iOS and Android apps. There is no SDK and no library to manually code or implement in the app. The Appdome technology adds the relevant standards, frameworks, stores, and logic to the app automatically, with no manual development work at all.

Check out Mobile Fraud Prevention or request a demo at any time.