This knowledge base article reviews 3 easy steps to prevent android apps and mobile games (APK) from running on app players like NOX and MEmu. Stop cheats from running your Android Mobile Games on NoxPlayer and MEmu App Player Emulator. No Code, Zero Dev, No SDK.

We hope you find it useful and enjoy using Appdome!

What Are App Players?

Gamers can use app players like Nox and MEmu to play Android mobile games on their windows PC or Apple Mac. App Players are emulators specifically designed to make mobile games easier to play on a computer. Just like all other emulators, they are virtualized tools that are used to run mobile apps in easier to use, software-defined environments. They allow someone to simulate, model, and mimic mobile application software & hardware behavior, including how apps interact with the mobile operating system and other systems.

Why Should Developers Prevent Android Games and Mobile Apps from Running on App Players?

App Players are used to cheat and give a gamer an unfair advantage over another gamer using a mobile device. App Players create an operating environment that looks and functions much like the mobile device model, with many of the capabilities of a real Android device. But the gamer can use a full size keyboard and mouse (joy stick) to give themselves an unfair advantage over another user who is using the Android phone. 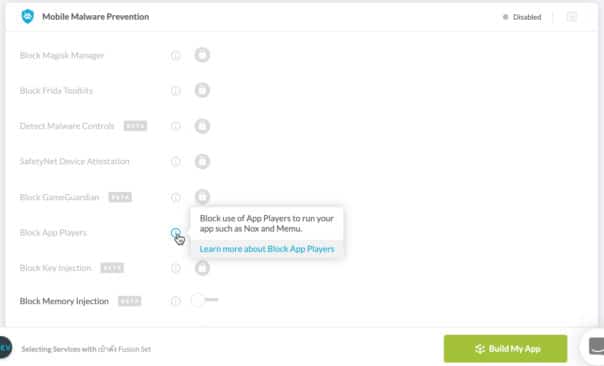 Congratulations! When your build is complete, you will see the notice below.

Here’s what you need to build secured apps that block an apk from running on an app player.

Using Appdome, there are no development or coding prerequisites to build secured apps that block app players. There is no SDK and no library to manually code or implement in the app. The Appdome technology adds the relevant standards, frameworks, stores, and logic to the app automatically, with no manual development work at all.

What’s the Difference Between Emulators and App Players?

Emulators and App Players are often described as interchangeable, but there is one notable differences between them.

To learn how to prevent hackers from using emulators to attack apps, you can read the KB article on No-Code Simulator Prevention.