How to Block Dynamic Hacking Tools

Cybercriminals often use debuggers to accomplish advanced techniques during the app’s runtime. Debuggers can be used maliciously by hackers in the following ways:

Appdome Prevent Dynamic Hacking Tools feature uses multiple advanced detection techniques to prevent malicious use of the debugging tool, for example by forcing the debugger to terminate, or preventing the unwanted action in some other way. Appdome uses multiple detection mechanisms and techniques which are spread throughout the code and operate on different API layers to detect debugging attempts performed against the protected application.  Upon detecting dynamic hacking,  the default action is for the app to exit/close.

Appdome is a no-code mobile app security platform designed to add security features, like Prevent Dynamic Hacking Tools to any Android and iOS apps without coding. This KB shows mobile developers, DevSec and security professionals how to use Appdome’s simple ‘click to build’ user interface to quickly and easily prevent the use of advanced debugging tools for to make unwanted modifications to mobile apps. 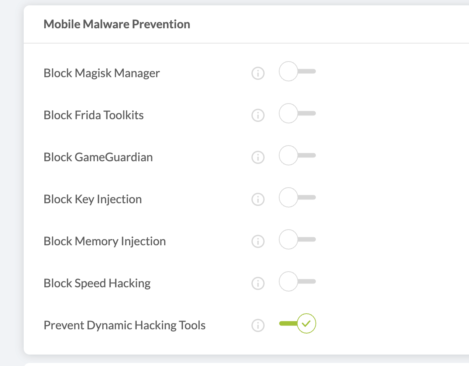 Congratulations! The app is now protected against Dynamic Hacking Tools.

Appdome’s no-code mobile app security platform offers mobile developers, DevSec and security professionals a convenient and reliable way to protect Android and iOS apps against Dynamic Hacking Tools. When a user clicks “Build My App,” Appdome leverages a microservice architecture filled with 1000s of security plugins, and an adaptive code generation engine that matches the correct required plugins to the development environment, frameworks, and methods in each app.

Using Appdome, there are no development or coding prerequisites to build secured iOS and Android apps. There is no SDK and no library to manually code or implement in the app. The Appdome technology adds the relevant standards, frameworks, stores, and logic to the app automatically, with no manual development work at all.

How to Block FRIDA Toolkits from Hacking iOS Apps

How to Block FRIDA Toolkits from Hacking Android Apps

ShlomiMaking your security project a success!